Can I still navigate? It may sound a bit of a funny question. Some people think navigating is like getting back on a horse, but there were two reasons for my question. 1) it had been a number of months since I’d last navigated, and that was after a reasonable break and 2) just 2.5 weeks beforehand I’d been in a (non-fault) car accident which had knocked both my physical and mental confidence more than I’d cared to admit. Physically I was in constant pain, but I was also undertaking medical treatment and took medical advice about whether I should go out that evening. I know for me that “getting back on the horse” with everything was vital, and so I offered at the last minute to navigate for the first time for Ben Cutting having missed some other events I would have liked to have done due to the accident. I was originally due to navigate for Luis Guiterrez-Diaz, but unfortunately we’d withdrawn a few weeks previously after he broke his car.

I hadn’t told Ben what had happened a couple of weeks beforehand, but somebody else had because when I arrived he checked if I should be out competing. I explained I was in no fit state to drive and compete (the 75 minute drive to the start was the furthest I’d driven since the crash) but I was happy to give navigating a go and see what happened.

We didn’t have the perfect run, but for our first time out as a crew we had a good run. Every driver/navigator is slightly different but we settled into a rhythm and, whilst unfortunately missing a few codeboards, whilst in pain the pain was bearable and we came home 1st in class and 4th expert.

It was good to get back out because whilst deep down I knew “don’t be silly of course you can do it,” sometimes it’s nice/necessary to prove it to yourself. It wasn’t my best night on the maps and I always find it frustrating to miss boards, but going back over navigation in the cold light of day is always worth the effort! 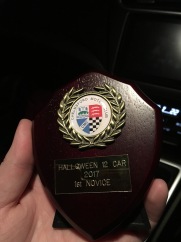 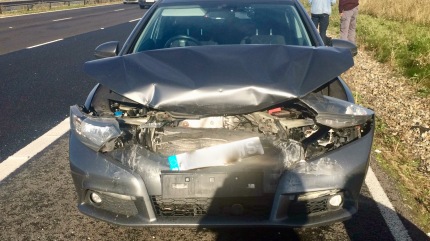 My 12 car trophy and the aftermath of my written off car on the M40. This is what it looks like if you’re stationary on a motorway and the car behind doesn’t stop pushing you into the car in front…

Many years ago I introduced my brother, Mark, to volunteering in motor sport but he’d never competed. Looking for “different” ideas for his birthday present, we offered him use of the MG ZR for a day, and to arrange his club membership and entry fee so he could try grassroots motor sport.

Whilst my brother may be an adult, he will always be my “baby brother” so yes, he has a driving licence, but the idea of him driving my car competitively and me sitting alongside him was still slightly amusing. Oxford MC had a Production Car Autotest at Finmere which is local to us and being less than three week’s before Mark’s birthday, it seemed an ideal event for him to have a go.

Having arrived at the venue, we got Mark to drive the car to scrutineering and then very slowly around the paddock so he had at least driven the car. We’d spoken to the organisers in advance who’d kindly organised our colour groups so that I could drive before Mark and he could see what the tests were like through passengering for me. We walked the test and gave Mark some pointers, but then it was down to him.

It was greasy in the morning, and those conditions really suited me. After the first round of tests, I was first overall! Mark drove his first set of tests without any mistakes or cone penalties and enjoyed it.

As the day went on, the venue dried out which was a shame for me; I was quicker in the slippier conditions and started to drop down the results. Mark was growing in confidence and even had the car sideways a few times. His times were getting closer to mine, and you could see and feel the improvements in his driving.

He said he really enjoyed his day, and hopefully he’ll be able to borrow our car in the future. As much as I teased him, it was really enjoyable to be competing alongside him and I’m glad we could give him the opportunity. He wasn’t last, and did well for his first competitive motor sport event.

Videos are on Youtube of both myself and Mark driving. 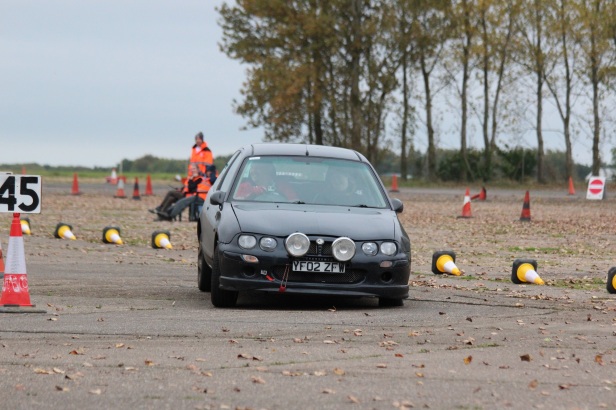