I thought I’d split my marathon weekend into three posts; pre marathon, the marathon itself, and post marathon. So much happened and some of it seems a complete and utter blur. It’s all been a bit overwhelming and having intended to sit down and post yesterday, I didn’t do a thing.

So, from my test run on Friday night to the start… Saturday morning started fairly early saying goodbye to Matt who was off to be Chief Marshal for the Corbeau Seats Rally in Clacton. I found it hard saying goodbye to him but I knew he’d be at my hotel on Sunday night, there was just quite a big challenge between saying goodbye and saying hello again!

I got the train into London in the early evening. My plan had been to go in earlier and watch the full FA Cup semi-final but I had lots I’d wanted to get done at home too. I’d written packing lists and a to do list; I wanted everything to be as ready as possible with my kit bag (for the lorry and for post marathon), my marathon (bum) bag, my suitcase etc. I got into London and the first thing I found was the Southampton FC coach, before I jumped into a cab to the Crowne Plaza at King’s Cross.

I’d decided to stay in London as I thought it would be easiest, but it wasn’t the best stay (broken jacuzzi which was my pre-marathon relaxation plan, broken air con in my room and a window which didn’t open, broken kettle in my room, oddities with room service etc). They were full and I couldn’t move rooms so having spent the day ensuring I was properly hydrated, I woke up dehydrated on the day of the marathon. I’d taped my foot the way the physio showed me and could only hope it would last. I’d taken my own porridge pot, banana and raspberries for breakfast to ensure I was ready only to find the kettle didn’t work and it took half an hour for a replacement, making the morning a little more manic than planned!

The coach pick up was 0715 so I was downstairs just after 0700 and before I knew it I was on the coach heading to Greenwich. I was slowly eating my porridge on the way and chatted to a couple of other ladies on the coach. We were off-loaded and I walked with a lady called Katie to the start, including going through an arch made for us by strangers! Once in the start area we sat down, applied vaseline and sun cream, chilled out, dropped baggage at the baggage lorries, had our last pre-marathon toilet visit and then watched what was happening on the big screen. Then it was time to head to pen 8…

It felt like ages waiting in the pen to get going. Someone had hired an aeroplane with a banner behind it saying “Jesus Loves You” and just in front was a man with a karaoke machine which was a great singalong session to chill out. Only Jennifer Carty could call me whilst I was in the start pen from an unknown/un-recognised number and say “do you know who this is?” freaking me out before the call cut out…but eventually she texted me telling me who it was. 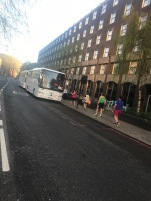