It had been quite some time since I’d last competed at Debden on a targa rally. Work and other commitments meant I’d missed a number of events there and Matt had competed with other people, so aside from remembering there was lots of gravel, it all felt a bit unfamiliar.

Our day started off with an amusing start as we parked up and Luis Gutierrez-Diaz looked up saying… “I’ve dropped my wheel nut down the drain.” Matt has one of those magnetic extending poles so having rescued Luis’ wheel nut, we scrutineered and signed on ready for the day ahead.

As well as the gravel, Debden does have tarmac but the gravel/tamac ratio has more gravel than other venues we tend to compete at. There were lots of “bus stops” and the quickest way really was to use the handbrake, but I’m not sure I’ve done that many handbrake turns in one day before!

Our day was going well and Matt in particular was on the pace and as high as 2nd overall at one point. Unfortunately his “cone magnet” seemed to be on and he picked up five cone penalties which equates to 50 seconds. Whilst he finished 5th in class and 7th overall driving with me navigating, those penalties really did make the difference between a great and a good result.

I picked up a couple of cone penalties and normally I know when I’ve hit them, but I didn’t on this day and I finished 3rd in class and 17th overall. I think a little more recent familiarity on gravel would have helped, but it was an enjoyable, and very dusty, day. Matt had insisted we flew back from holiday a day early in order to make the event so it was good to both finish and be able to drive the car home again afterwards. 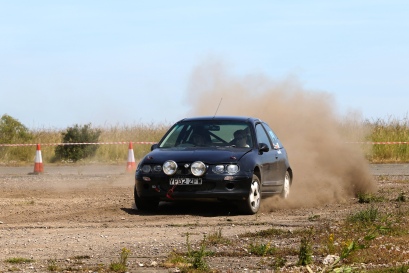 Photos thanks to M&H Photography.