I’ve not navigated for Matt on a 12 Car for a while (nearly two years), but I have enjoyed competing on them with Luis. However, I’m Luis’ “stand in” navigator when Lucy Fryer cannot make events, so with Luis and Lucy entered I asked Matt if he fancied entering… The slight fly in the ointment was that Matt was due to land from Jeddah at lunch time, but he was up for entering and so in our entry went. Thankfully, he landed on time and we battled our way through M25 traffic to make the start by the skin of our teeth.

With six months having passed since last navigating on a 12 Car, I knew it would take a little time to get my brain back in gear, but I struggled to plot the first section. It should have been one of the easier pieces of navigation; “pass these features that touch the road.” The clues were letters, spot heights etc and I knew (and was prepared for) crossing a map, but I couldn’t for the life of me see where “r” touched a road. It eventually turned out to be the second “r” in “Water works” but I took a long time looking for it. The rule I was taught was “if you can’t plot the navigation forwards, plot it backwards” but I couldn’t get it to work backwards either!

Being rusty, for the first few sections I didn’t manage to plot on the move until the latter half, which did help. There was another section I struggled to plot (avoiding sections of grid squares) as I struggled to see a route that worked, but eventually we got it down.

Along with nine of the twelve crews, we missed the first code board and unfortunately a mis-plot by me at the end saw us miss the last board too. The navigation worked going two different ways and if this is the case, you take the shortest route, but I hadn’t spotted the navigation worked two ways. A frustrating error and one I thought would prove costly! It was costly in terms of overall results, but to walk away with a class win was a pleasant surprise.

Having had a look back through past results, it turns out I’ve won my class on the last three 12 Cars I’ve done, but more interestingly, that’s been in three different cars with three different drivers; Ben Cutting and a Micra, Luis Gutierrez-Diaz in a MG ZR and now Matt in our MG ZR. It looks like I’ll be out on the next CMC 12 Car in November, but with Luis, so time to get some more practise in! 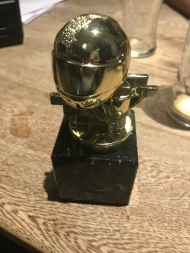