Nine years since I first competed on the Carpetbagger, as a driver, it was time to return but this time as a navigator; my first time navigating on a road rally.

Having met up with Rich, we headed for scrutineering and then to the start. Having signed on there was plenty to keep my busy with plotting, and getting my head around the navigation had been one of my pre-event concerns. Whilst I was kept busy, and with a few pointers from fellow competitors, I managed to get everything down and sorted even if it did take me a few hours.

It was our first event competing together and I was annoyed to miss a slot early on, meaning we missed a control. We started to settle into things but for the first time ever the thing I’ve always dreaded happened; I was sick! I was wearing travel bands and had Kwells with me, but I understand I wasn’t the only one to feel a little worse for the wear.

We decided to cut to petrol, but I could see we could try and collect some controls and boards on the way and we managed to get those (thereby reducing penalties). Having filled up with fuel, we headed off for the second section, and it seemed we weren’t the only crew to cut; it was going to be a long and tough night.

The second section felt like it was going much better. Having settled in to things, we were finding all the slots and things felt like they were going well. Unfortunately it wasn’t to be, and we ended up having to retire with car issues just before 4am in the morning. Thanks to the other competitors who stopped, and the marshals nearby and Rich’s Dad, Brian, who came and picked us up with the trailer.

We headed to the finish where I waited for Matt, who was also out competing (I’d turned down navigating for him!). He finished a respectable 12th overall and once he’d had his breakfast and packed up, we headed home.

A disappointing end to the event, but we’ll be back!

It’s 2019 and that can only mean one thing; it’s time for my London Marathon training to truly commence!

I’ve got a place for Dementia Revolution which is a cause close to my heart, and I shared more about here.

This year, I’ve decided to go for a 14 week run/walk plan from Dementia Revolution (in 2018 I used a London Marathon beginner’s training plan). Training officially starts week commencing 21st January, however I did go out for a few sessions over the festive period and I have done three sessions during the week commencing 14th January.

As well as the outdoor training, this year I’m also cross training including strength and core work, which is something I didn’t do in 2018. I’m hoping this will make things seem a little easier and help me as well.

As well as the marathon, I’ve got a place in the London Landmarks Half Marathon on 24th March. I was lucky enough to secure a ballot place, and it fits nicely into my training plan as well as being able to raise awareness for Dementia Revolution so two events at least to look forward to this year.

The start was just under an hour from home and we got there in reasonable time to sign on and get ready. Then, it was time to head off. Matt hadn’t navigated for over a year on a 12 Car so as always it takes a little time to get back into juggling maps, timecards, plotting the route, doing the maths etc.

We felt like we were having a good night, and the timecard showed how many code boards we should be collecting in each section and we seemed to have them all. We got to the finish and found ourselves finishing second in class and third overall, finishing on 0 fails and 26 minutes. Our time lost on the night was really due to plotting, but we wouldn’t have found enough time to creep up to second on the night so a very good night from our perspective, close to home and a good result to commence 2019. 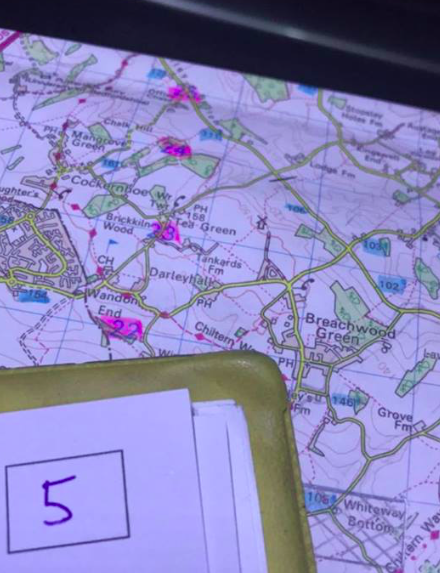