There’s been plenty of training going on – 5kms, swimming, gym sessions, gym classes, PT sessions etc – but a weekend meant another long, slow run (LSR) session. I’d missed my run the previous week, as I was competing on the Saturday which was a long day, and worked on the Sunday. I find weekends like that tough – mentality I hate missing an LSR session but I know it’s only going to get harder. I make sure I cross train, but it’s not quite the same…

The Waddesdon Greenway I thought had opened recently, but it turns out it opened at the end of last summer. It’s a long, winding path from Aylesbury Vale Parkway Station to Waddesdon Manor, and to get to the start of the path is 2km from my house, so already getting some distance down. The path itself is 4km each way and crosses a farm track and a main road and is surrounded by fields and quite simply, lovely!

I’d not got round to trying it but I’ve got a little bored of the Fairford Leys/Thames road route I’ve been using and being traffic free was keen to try this route, and I’m glad I did! I fear the tranquility of it may be lost when HS2 is built (it’s due to cross the path) but the route is lovely, and on a sunny Saturday afternoon, it was full of families and people enjoying it.

The route follows an old Roman Road (with stones they found along the path) and I followed the path all the way to the Waddeson estate, before taking a right turn and heading into the village and doing a little loop, before heading back. I’d decided to bring my session forward from Sunday to Saturday, so I could enjoy the weekend more, and I was glad I did.

Towards the end I was starting to feel my efforts and I’ve also been wondering if new trainers are needed. I think the answer is yes, and I’ll go for the same again, so time to find some pennies…!

The VSCC Pomeroy Trophy has been an event I’ve wanted to do for a long time, but I’ve never got around to it! It’s held on or near the Goodwood Stages and as that’s a championship round we’ve prioritised that. However this year, having decided not to do stage rally championships and selected events instead, it gave the opportunity for us to enter it.

The event requires a race licence and Matt and I both have ours. Matt said he didn’t mind which car he drove, so I chose the Micra leaving him with the MG ZR. We scrutineered and signed on during Friday evening, and headed over early on Saturday ready for the day ahead. Our friend Haydn came with us in-case we needed a hand as we were running two cars, which was appreciated.

The morning involves various tests, including a slalom (held on the old start/finish straight), a speed test on the Hangar Straight and a braking test on the “new” start/finish straight. I did slightly regret not going harder in the brake test, but it was a balance between speed/time (which was measured) and ensuring I stopped in the right place (also crucial to not receive a “fail” for not stopping astride a specified line).

As fun as the morning was, the “piece de resistance” is a speed trial run on the Silverstone Grand Prix circuit during the afternoon, held under race conditions (one of the reasons a race licence is needed, as well as the many cars on track). We had two warm-up laps and it was a rolling start. It was 40 minutes and we’d each been given a set number of laps we had to achieve; mine was 12. I intended to count them, but after three or four I couldn’t remember how many I was on so I soon gave up with that and just kept lapping!

I found the event mentality for the driving test interesting; I wasn’t driving on my limit, but was trying. Penalty marks could be applied for spinning, going off the track, etc and I wanted to make sure I got my laps in without pushing myself to my absolute limit. I was passed by a few cars and I passed a few, including three in four corners!

Come the end of the driving test and I’d completed my set number of laps, which was good! Matt unfortunately had a problem and had to pit (a bonnet pin came loose and the bonnet was part lifting), and he was one lap short. We both had a good day, and when results were published, it shows me as 2nd in class and 11th overall and Matt 2nd in class and 14th overall. Lessons for next time? Push harder in the brake test (probably the difference for a top 10 for me) and Matt, without his pitstop, would have had an extremely good result. Until next year!

A video of my 40 minute speed trial is available on YouTube. 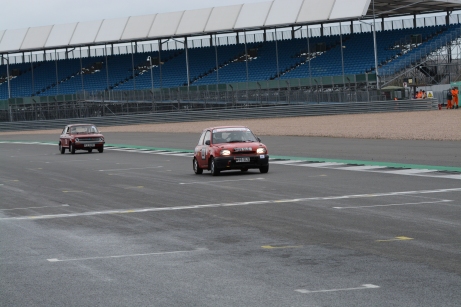 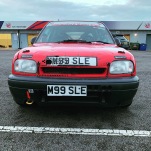 Thanks to Toby Galbraith for the solo “on track” image & Sarah Tibbetts for the group shot.

So, marathon training is well and truly back! I’m training four to five times a week and including lots of cross-training this year; gym work (cross-trainer, treadmill work including sprint sessions, weights, etc) as well as some swimming which is typically “active recovery.”

Marathon training can only mean one thing at weekends, the return of the “LSR” or the long, slow run. This year I’ve decided to combine two plans; the Dementia Revolution Walk/Run plan, and the Bupa plan, along with the extra cross training sessions and some things I learnt last year.

I started off with some short distances (3km, 5km, 6km etc) but missed a couple of early long runs; quite simply life, work etc got in the way. My first long session was Sunday February 10th and it was the first time I’d hit 10km since the Vitality 10km in May. I was only a few seconds off my time there, so I was happy!

I learnt last year that when I first start training, when I get home my body goes into some sort of shock/recovery mode; I know I need porridge and at least two pints of water before I go out, but when I first start training, I’ve not found a way around the “shock.” In essence I get really cold and feel absolutely awful; which wasn’t ideal as we had lunch and an escape room planned with friends! A long hot shower helped, and I didn’t feel amazing, but not as bad as I used to and at least I now know what I need from experience (hot shower, little food, water etc). Onwards and upwards!