I thought it had been a while since I’d done one of the Anglia Motor Sports Club (AMSC) Autotests or AutoSOLOs, and looking back my last one was April 2014, so there’d definitely been a bit of a gap.

Matt had arranged a surprise weekend away as the event was on our wedding anniversary, so it wasn’t quite such an early start on the day which was a bonus. Scrutineered, signed on and having had a bacon roll we walked the tests. They were all quite straightforward (and numbered which helps!) but looked tight and technical in places.

Because Wethersfield has lots of space, the event runs with four different tests set up and you complete one test before moving to the next one. This is good in terms of flow, but I definitely found it hard to keep “re-learning” each test. I’ve not done many of these events in recent years but the ones I have done you get to do the test more than once in quick succession which helps so I’m a little out of practise. Thankfully, I didn’t get any wrong routes on the day but I did pick up a cone penalty.

The AMSC events have a “all runs to count” rule which is different from the events I normally do (where you can drop your worst run) so it’s important to do clean runs and not make mistakes so one cone penalty over the whole day is not too disappointing. Photos and videos aren’t allowed at Wethersfield so none to share from the day, but it was good to be back out competing before a couple of events driving and one event marshalling in September currently planned.

After all the weeks with a recent heatwave, when it came to marshalling at Bovington for the stage rally things had definitely turned! Whilst we only marshalled on the Saturday of the two day rally, I understand things were worse on the Sunday but the Saturday still meant full waterproofs all day with a mixture of constant drizzle to heavy rain.

Our marshalling point was between a 90 left and a 90 right bend and the changing conditions made it interesting. Nobody went off where we were, or even spun, but there were definitely some moments with some more spectacular than others. As it got wetter, it was noticeable how much quicker the four wheel drive cars were compared to the Escorts so it was no surprise to see at the end of Sunday, with wetter conditions, that a four wheel drive had taken the overall win.

We might compete at Bovington later in the year but in the meantime, it was good to be out marshalling and giving a little something back. With Saints playing at home on the Sunday, I stayed down south which worked out well and was a good weekend combining motor sport and football.

A hillclimb is an event I’ve wanted to do for a while, but I’ve never quite found a date or event that has worked. There’s always been a championship that we’re doing or a clash with something else on. I thought my first hillclimb would be at Wiscombe last year, but it didn’t quite happen. Working with someone who regularly competes at Loxton and also has an MG ZR 160VVC meant it was time to find a date and go hillclimbing for the first time…

Having signed on and walked the hill on Friday evening (with Rachel’s help and guidance), we got some dinner and an early night. I was really pleased to have done the sprint the week before and was looking forward to the event.

Matt went first and set a respectable time in the 60s, which was my aim for the day. I then had my go and it felt slow and slippery and not flowing at all, but I did a 73 something so wasn’t too disheartened. I’d sat on the start line for about 20 minutes after the car in front of me had gone off (he and the car were fine) which had given me plenty of time to remember and visualise the course and think about what was to come! Having waited for the other classes to run through, it was then time for practise 2 and we both went quicker again.

There was a wedding taking place nearby which meant the event had to have a compulsory lunch break from 1255 to 1410, but as we were running in batch 1 (Matt) and batch 2 (me), we just managed to get our first timed runs in before lunch. We both went quicker again, with Matt on a 67 something and me on 70.23 – just 0.23 off my pre-event target. As much as I love my motor sport, there are also things I love about being female too so having had lunch, Rachel braided my hair whilst we chilled out waiting for our next run.

With the compulsory lunch break and the majority of other cars needing to run, it was nearly three hours before our second and final timed run of the day. I knew two key places I was losing time and what I needed to focus on (and had also consulted with a friend called Rob who has competed there and gave me some pre-event and on the day pointers). The run felt good and whilst I tried, I can’t say I was really on my limit on Sunday which I had been the week before. I’m not quite sure why, it just never truly clicked and whilst I was pedalling reasonably, I wasn’t pushing to my limit – perhaps it was the lack of class battle? Who knows.

I got to the top of the hill and saw the time thanks to the ticker tape at the top… 70.09. I was absolutely gutted; 9 hundredths off my pre-event target isn’t bad but to be so close but so far is disappointing. Others have said for my first hillclimb and first visit to Loxton Park I shouldn’t be too disheartened, but I am my own worst critic and I know the car had it in it; the limitation was me! We have onboard videos and I’ve watched them a number of times and know a number of areas I could have improved, so maybe next time.

Whilst I may have finished just outside the target I set myself, I really enjoyed my day and first experience hillclimbing, and of course being able to drive the car home again afterwards is also good. Until next time!

Image thanks to CaptureYourCarPhotography – more to come once proofs have arrived and I’ve purchased the full package! 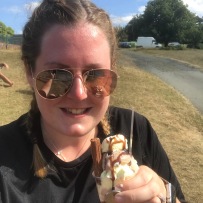