Competing on the Bath Festival is always enjoyable as it is a well run event, but for me, it’s also a chance to head back to some of the lanes and haunts of my childhood. We moved to Wiltshire when I was 7 so whilst I’m from Hampshire and a Southampton supporter through and through, Wiltshire comes a close second and there were many familiar areas.

I was navigating for Luis Gutierrez-Diaz in his MG ZR, and he passed through scrutineering and noise before I met him at signing on. Having signed on, it was time to go through the road books and highlight anything I thought was pertinent and before I knew it, it was time to start.

The tests were a mix of farms, forests and other venues such as Castle Combe circuit. I don’t mind navigating from road books but without a tripmeter, I still have some work to do on always being able to confidently estimate distances once I’ve called them, especially with few references at times! My sweet distribution to marshals can at times also be a little wayward, but that’s another story, and one to also work on…

Matt was out marshalling on the event, and it was good to see him along with our friends the Mephams and many other familiar faces. There were no real “moments” to speak of, but there were some epic venues such as Castle Combe which utilised as much of the venue as possible.

Our result was not quite as good as 2019, but respectable none the less. We also performed our first wheel change as a crew with needing to change both front tyres during the day which I think we did very quickly – there wasn’t much time to be saved!

A great event as always, and a 3rd in class was a good result to back it up. 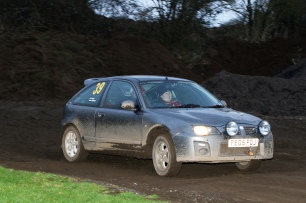 …the cat will play!

With Matt away on a work trip, the opportunity to go to Essex for a 12 Car was tempting and with Lucy Fryer free, we decided to team up and formed the first all female crew on a Chelmsford MC 12 Car for many years.

The M25 was kind (it was closed but after I’d passed through!) and I had plenty of time to get petrol and dinner, as well as the normal scrutineering, signing on checks etc.

Lucy is a very good navigator, so I was hoping I would be up to scratch as it is a team game! She may have a different viewpoint, but I think I listened fairly well all evening; we seemed to be picking up code boards and it didn’t take too long for us to settle into a rhythm.

We had a few moments of double checking/sense checking but saw few other crews and had what felt a reasonable night, although we knew we had dropped a little time.

We finished 2nd in class and 3rd overall, which was a great way to start our competing together and a very good result. Hopefully, we might get to do another event together in the future and may find some fellow female crews!