Having been disappointed not to make the top on Sunday, two days later we headed off to try the walk from the Saints Path which is said to be the easier, but less picturesque, route.

Some training strains were still apparent but this was the best day for weather and had given a rest day in-between. The Saints Path tackles Mount Brandon from the other side, and so it was a drive over the Conor Pass and through Dingle before carrying on out to start our walk. We found we were the only car in the car park, and off we set.

The Saints Path has wooden crosses marking the route, of which I understood there were 14; it turns out there are 16 as the first cross ten minutes after starting the walk is not numbered, and neither is the cross at the top. Whilst this is known as the less picturesque route it still had some stunning views.

Some would say climbing a mountain isn’t a substitute for a long run and they are different, but this was still hard in it’s own way and in a manner different to what I’m used to in terms of long runs. The early part of the route was across moorland which would normally be boggy, but on our walk was completely frozen. The path then became much steeper and more rocky, with some scrambling and climbing needed as we got higher. This route was much clearer than the Pilgrim’s Path with many more white route markers on the Saints Path than we had found a couple of days earlier.

It was one degree centigrade when we left the car and it is said it can be up to 10 degrees colder at the summit. Whilst we couldn’t measure the temperature, it was definitely cold and biting and we stayed long enough for a few photos before heading down. We saw one other person on our way down who was climbing up and was making the best of it being a fine day. We’d read the summit is often covered in cloud but we had great views when we made it to the top.

The walk was 9.65km with 773m of elevation gain. There was snow on the sheltered side of the summit, and near the top we crossed a number of frozen streams. For the last 2km on the way down it snowed, but we’d had the best of the weather for the rest of our walk and we were pleased to make it to the top!

Having planned a week in Kerry in February, the question of what would I do for my marathon training was a key one. We’re lucky to be able to use my Auntie’s house which behind it has Mount Brandon, the tallest mountain in Ireland outside Macgillycuddy’s Reeks and the ninth highest peak on the island.

The weather for the Sunday looked good, and so we decided it was time to try and climb Mount Brandon for the first time. I’d downloaded and printed various information before going, and off we set. A short drive up the lane took us to the small car park and we set off.

A lack of knowledge on our part meant we didn’t know a “grotto” is the name for a religious area with the Virgin Mary at the start of the path. There was some construction work going on at the grotto which was just visible up the hill, but we carried on at valley level and went straight on following the obvious path. After a short while the path petered out and we weren’t sure where to go. Without knowing we’d missed the path (on the way down we found there was a sign but you needed to be looking off to the right to see it, it wasn’t on route or that clear), and knowing it did go along the top of the ridge, we decided to start climbing straight up the Faha Ridge.

Part way up, we saw other walkers a fair distance to our right, but on we struggled as we’d climbed significantly by then. It was steep and hands and knees climbing in places, and with hindsight if we’d known that was the path we would have retraced our steps much earlier and taken it. We eventually made it to the top of the ridge, and started taking the “normal” path which was considerably easier!

Having climbed about 500 feet “straight up” for want of a better phrase, and having tweaked an existing groin strain from training, it wasn’t much fun. We made the decision about 75% of the way up to call it a day, which I think was sensible and probably the right (but if not frustrating) decision in the circumstances.

We completed 5.88km in the end and whilst we didn’t see all the glacier lakes and the summit, it was still a reasonable effort with beautiful views. We also discovered an engine from a Luftwaffe Focke Wulf 200 ”Condor” which had crashed on the ridge on 20 August 1940 with all the crew surviving (read more here.) 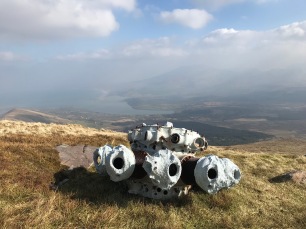 Having missed some sessions with a bug/virus, today was time for my longest session to date… 8 miles! I need to start working out how I’m going to fuel and hydrate on the day so I decided to try something I’d seen suggested online; small pieces of cut up hot cross bun.

I decided to try a new route having put various plans and routes into google maps, and settled for heading out into the lanes for the first time. I decided for the distance, this would be easier than going to the other side of town and back, and I’d not managed to find a route where Matt could drop me and I could make my own way home (without having to clamber across various grass verges).

Strava has my route as 8.08 miles (13km) whilst google maps has it as nearly 10.5 miles. I’m not quite sure which to believe but I’m going to go with Strava aka the shorter distance to be on the safe side. Everything felt good until just over halfway through when my hip “went;” I can only describe every step after that as feeling as if something in my hip was grating. I had a few other aches and pains but nothing major, but after this my pace dropped off.

Refuelling worked, and I’m pleased to have hit the distance. I’ve had a good stretching and foam roller session since getting back so I’ll ice and heat later (the car accident taught me how beneficial that is, and I still have to do it on my back/shoulders/neck) and plan a recovery walk tomorrow and a 5k later in the week before the next long session next weekend. 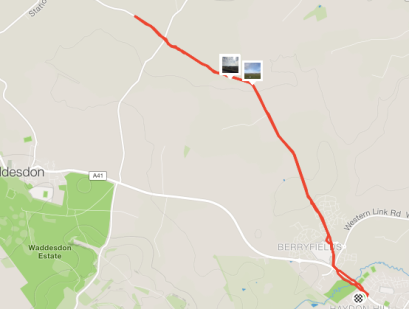 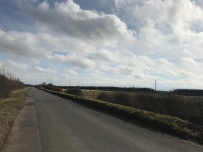 It seems as if it’s been a little while since I’ve posted a marathon update on here. I posted a few weeks ago about “training interruptions” and that hasn’t changed! I’ve got some 5ks in but missed my long session last weekend. A day rallying at Goodwood and then a day away for work were good but kept me busy, and unfortunately I’ve not shrugged off the cold I commented on almost a month ago.

I decided to listen to my body rather than push on this week, and I got worse but thankfully now seem to be getting better. Whilst I’ve not had any time off work, anyone who knows me well will tell you when I’m refusing dinner and down to two meals a day and in bed at 9pm more than once in a week something is not normal! I’ve a weekend of “home time” this weekend and an eight miler planned for Sunday so should be back on track/back on plan imminently. And hopefully over the worst of whatever this lingering bug is!

A few weeks after Brands Hatch it was time to head to Goodwood. Matt and I have both driven there before, but not for a while as we have helped and tried to put something back for the last couple of years. It would have helped us in 2017 to have competed as it was and still is a round of both championships we’re doing, so we decided to enter in 2018.

Richard and Emma Olsen offered to service for us as they were heading to the event, which was great as it took a little pressure off us again. At Goodwood, noise, scrutineering and signing on are all held on the morning of the event so it was an early start to get to the circuit. Once completed, it was time for the competitor briefing and then out for SS1.

The first stages of the dry were damp but no ice, so it was rally slicks to start with. It was good to be back in the car, on an event that felt quite different to Brands – there are more faster, flowing sections than Brands Hatch with various chicanes etc around the stage.

The whole day went fairly well with us without any major errors in either seat, but the pace simply wasn’t there disappointingly. It started to rain heavily part way through the day so we changed to wets, and I seemed to lose a fair bit of time on these next two stages where I guess at the time I didn’t have full confidence in the car/my ability behind the wheel!

Whilst my pace was disappointing, being back out competing again so soon and with a bit more confidence and seat time under my belt was good, and I still enjoyed the day. I compete for fun and know some of what I’d do differently next time if the same event was to run tomorrow! Goodwood is always a very social event so it was good to catch up with friends too who had come to watch.

You can view onboards from our event here. We filmed both day and night stages, and one films our faces/helmets instead of the view out of the car as something a little different! 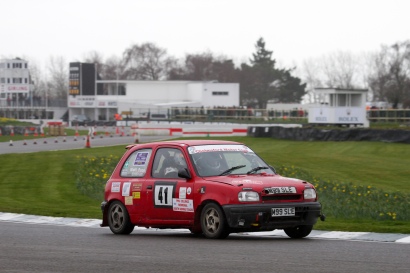 Photos thanks to M&H Photography