After spending all of 2018 driving on stage rallies, we wanted to do an event for Matt to drive on and this new event at Deepcut aka the Mini Tempest Stages fitted the bill. The Newtons arrived before us and saved us a service space, right by Rally HQ, the food wagon and the toilets – perfect!

We knew the stages were short but technical with a holding control at the other end, before tackling the stage in the other direction to come back to service. It was our first time doing an event set up like this and it worked well. The stages had a little bit of everything and were definitely a challenge, but good and well suited for the Micra, with them being tight and twisty.

We didn’t really have any dramas to speak of, bar finding SS3 blocked due to the car in front blocking the stage but we got around them and carried on. We managed to catch a 1600cc car which started 30 seconds ahead of us and were on their bumper as we came across the finish line, not too bad for a three mile stage. We were on and off the pace with the Newtons in their new car; I think at our closest we were four seconds off them, but sometimes they’d pull out 12 seconds. They had a problem on SS2 and lost time (the exhaust came loose), meaning we inherited the class lead where we stayed for the rest of the day.

After a second in class for me as a driver at Wethersfield in September, once we had that class lead, we didn’t want to lose it! We knew we had a healthy gap (over a minute) to the car behind which was increasing, so it was a case of keeping on it, doing what we were doing and not making any silly mistakes. Matt was driving well and pushing on, and come the end of the day, we finished 1st in class and 12th overall.

Whilst winning the class was a great return to driving/co-driving for both of us, the 12th overall represented our best ever overall stage result in the Micra as well. The stages definitely suited us, but it was a really enjoyable day out to fill the festive period and also enjoyable to compete on two events in two days, after the autotest the day before, and do something different. There were lots of familiar faces marshalling as well, so good to see lots of people and a really good way to finish the year. 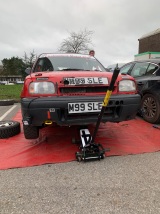 “How to find entries” seems to be a common theme in motorsport, and we discovered a new event to try over the festive break thanks to social media. Cannock & District Car Club advertised their Stuff the Turkey Christmas Autotest at Curborough on Facebook, we saw it, entered, and the rest is history.

Curborough is around 90 minutes from home for us on a good run, so closer than many of the events we do in East Anglia. We had both taken leave between Christmas and New Year and this event seemed a good way of blowing off the cobwebs and still enjoying competing.

The tests used two sections of the sprint track as well as the paddock and Matt and I were both feeling quite competitive with each other. On the first test I overcooked the final hairpin thanks to using the handbrake and lost time, and then clipped a cone on the next test. Those two incidents combined cost me over 10 seconds, and without any test times being dropped, they proved costly for my final result.

After that, Matt and I were either setting the same time on tests, or I was one second ahead of him, or he one second ahead of I. This led to some healthy in-car competition and with it being a Production Car Autotest, passengers had to be carried, meaning it was one of the first autotests we had done with the other person alongside.

It was a good event with Matt finishing 2nd in class and myself 7th; “what could have been” again for me as the pace was there, just not the accuracy! I still came away with an award (a massive box of chocolates) and hope to get back to Curborough to compete again this year. 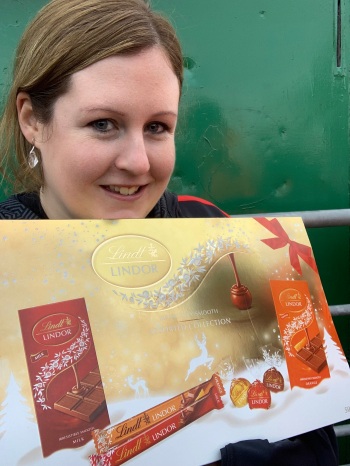 The first motorsport event I ever competed on was a Car Trial, and it’s a discipline I don’t do enough of now but still love. It was an early start to head to Suffolk but after a night of heavy rain, a bright and crisp December day greeted us.

I made a couple of mistakes on early hills which proved costly against Matt, and was frustrating. Matt had worked hard to fix the car after breaking the driveshaft on the Rushmoor Targa, and everything seemed ok. There was a hill that I managed to get to a 1 where Matt got stuck at the 11 with a tricky ditch (the line was everything and millimetres mattered!) but then on my second attempt, I was ever so slightly to the left and got stuck as Matt did. I was also the only one of us to clear a hill (meaning a zero score) but apparently I brushed the 4 on the way up which was a shame.

We were first car on a number of hills, and this meant that when a route was changed in the afternoon we were the first to find for a road car, it was almost certainly not passable in one section. It was extremely soft and boggy and perhaps the specials would have made it through, but not us! The car dug down and we were lucky not to do too much damage with a damaged bumper, and the radiator and crossmember pushed back which required some post event fixing.

We really enjoyed our day and with a jet wash located on the way home, made it home with a little less mud on the car than we finished the day with.