Our final event of the 2019 season was the Rushmoor Stage Rally. Having entered the Micra at the targa rally there in November and having good results was a good move, but we knew the stage rally would use different parts of the venue.

Whilst the venue is one of our closest (just under 90 minutes away), it was still an 04:30 alarm to make sure we were there in time. The Newton brothers had saved us a spot in service so we could be together and we unloaded, passed noise and scrutineering, signed on and we were ready to go.

It did help a little knowing the venue, but conditions and the new bits were also an unknown. The organisers had recommended walking to see the split/flying finish/stop as they said it was tricky and we had done this. I tried to keep it neat and tidy but felt I’d been really slow, so to find I was about my “normal pace” off the Newtons in the Nova was pleasing after SS1.

The next couple of stages went well, but then SS4 was a little interesting. We came off the start and through the merge and all was fine, but then I couldn’t see anything except white smoke. It then became clear there was oil down and we tiptoe’d round the bend and I spotted the car in front (on their second lap) was on fire. It wasn’t a nice thing to see as we were completely helpless to warn them, but it seemed to self extinguish and they pulled off albeit leaving their mark with a trail of oil!

Coming round for our second lap, a Fiesta came through the merge just in front of us. He of course did not know about the oil… so having dropped back ready to tip toe through the 90 degree right hand bend and hairpin left, we watched him sail straight off when his car would not stop. We found out afterwards they were fine and continued after meeting the kerb and a couple of pallets.

The Newtons in the Nova unfortunately had to retire with diff issues around this time, which meant we knew we were second in class; dropping a few seconds per stage to the class leaders but with a comfortable gap of over a minute to 3rd in class. I didn’t feel I drove my best at the event and wasn’t fully pushing Muriel, but the times were ok and I think 15 months out of stage rallying did show a little. Aside from a rather interesting tank slapper over a crest on SS7 (which thankfully came back to me), the rest of the event was fairly uneventful for us.

Finishing second in class equals my best ever stage rally result. With over a two minute gap to third and just over 40 seconds off the class winners it was a good way to end our 2019 season.

Matt and I recently acquired a new car, and what better way to test it than entering it into a motorsport event! I didn’t see the car until the day before the event, I sat in it for the first time on the morning of the event as it came off the trailer and drove it for the first time when I drove it to a test. Whilst it runs, it really is a bit of a shed (and smelly inside!) but to have a car that we didn’t truly worry about was good.

There had been a lot of rain before the event and people were getting stuck in the paddock when we arrived, which there was absolutely nothing the organisers could do about apart from blocking off the boggiest bits, which they did. We unloaded near the entrance (which itself was up an interesting white) as having seen 4X4s getting stuck, we knew we had no chance in our front wheel drive tow car.

As a non-road legal car, we were in a class with various modified cars. The Rover 25 is, in reality, a bit big and long for a car trial and we were towed and winched many times during the day, often ended up stuck on the “belly” of the car. However, being out competing was good (although I’m not convinced about having to push Matt and being covered in mud!). We’re going to hang onto it for one more car trial and then it will be time to move it on. 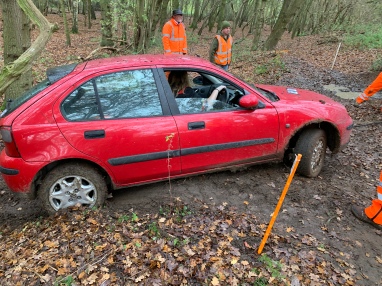 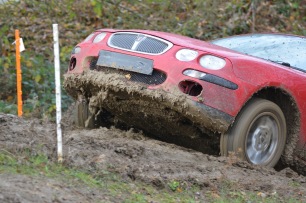 Thanks to the organising club for some of these images.