Many of us have that one person who got us involved in motorsport, or supported us in motorsport. For me, mine was Chin – a man I met and much later found out was really called Martin Chinnery.

I discovered grassroots motorsport as a teenager, and have therefore known Chin for nearly half my lifetime. I joined Sevenoaks & District Motor Club, and not much later joined their committee. I used to get the train from London to early meetings, and it was always Chin who collected me from the station and drove me back to wherever was needed – no grumbles, he was always there. We’d get dinner and catch up, and he would encourage and support me. In those days, I never managed to persuade him to use (or even turn on!) his mobile phone to let him know if my train was delayed, but he was always there patiently waiting.

I don’t recall the first time I met Chin, but having joined Sevenoaks, it was probably at my first event I attended. I do recall being persuaded by him to navigate for him on a Scatter; I didn’t think I could do it, but as always he was encouraging and supportive and persuaded me that I really could navigate for him for the first time and it really didn’t matter how I did. From then on, I kept navigating, and it spurned my desire to try and explore as many different disciplines as possible.

After a few years on the Sevenoaks committee, I took over editing the club magazine, The Acorn. Again, Chin was there to guide me along the way and help me understand how everything worked. He would collect the copies and post them out, and we’d liaise regularly for “CCC,” Chin’s Chairman’s Chat. Looking back at the issue from June 2009, it was typical Chin with a bit of everything; he was pleased to see autotests starting again, had been spending lots of time on Crystal Palace, been out on a regularity 12 Car with his good friend Andy Kilby which they won and also competed on the Miglia Quadrato. To me, this sums up Chin and the path I chose to follow thanks to his support – lots of events, lots of motorsport, lots of variation.

Motorsport is a community, but most importantly a family. In those days, Chin was working at Sebron and between him (selling me parts) and Andy Elcomb (teaching me how to service my car, by doing it for me and showing me), I was running my first Micra and keeping things going. Through good times and tricky times, he put me in touch with people and helped me with anything needed.

In 2013, I saw an advert for a “Go Motorsport Regional Development Officer” for the South East, and I thought that was a role I fancied. By this point, I’d known Chin for many years, but I remember nervously calling him as Chairman of the Regional Association to see if he would support my application. Indeed he did, and we had a good chat about it at Crystal Palace a short time afterwards. From searching through my emails, I still have his emails of encouragement, him chasing me for news after my interview (there wasn’t any at that time!) and his genuine delight when I got the role.

Not only do my weekends look the way they do thanks to Chin, but professionally, that early support led me on to greater things; three years as a Regional Development Officer for the governing body followed by three years full time at the governing body can all be traced back to his early support and encouragement when I started in the sport, and then when I decided to apply for the Regional Development Officer role.

In recent years, I didn’t see Chin as much having moved out of area, but when I did, he was always there and catching up as if we had last seen each other yesterday. The last two occasions I saw him of course revolved around motorsport. We had a great catch up after Regional Committee in February, and a couple of weeks later we headed to Kent to compete on his Scatter. Matt and I won, my first time as a driver, but actually the memory I treasure best is sitting in The Bell in Kemsing, just like he and I used to before committee meetings, catching up over a dinner table. We last conversed when he kindly sponsored me for the London Marathon, little did I know that would be our last time.

I think it’s very “Chin” to have only learnt of how Matt met him, now. In Matt’s words;

Many firsts going on in this photo.

1.) My first event in the mighty (ex. Dave Leadbetter) MkII Astra
2.) My first rally with Ian Phillips on the maps
3.) My first ‘south of the River’ Weald MC rally
4.) And then my first real encounter with Chin, I hadn’t really known Chin before and I remember meeting him at the next Weald MC 12 car where he presented me with this photo he had taken. I remember thinking at the time how nice it was of him to photo us on the rally, and then find me after the event to pass on a copy for free. Over the years I really valued my friendship with Chin, and learnt a lot about the world of clubman motorsport from him. 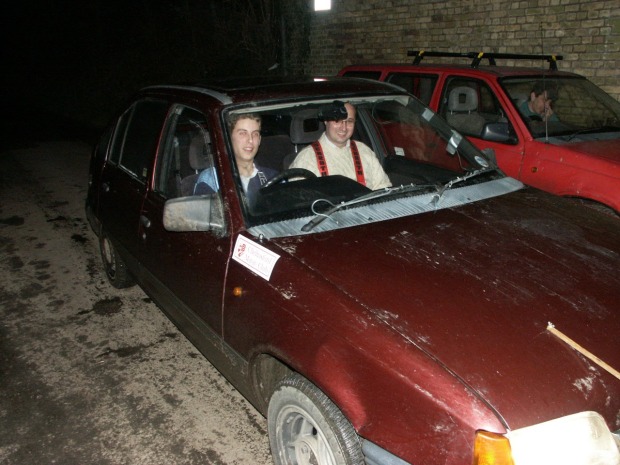 For me, I have a lot (and many things not captured here) to thank Chin for. His guidance, advice, support and everything he did helped me get to where I am today. I will forever be grateful. Thank you for everything, Chin, and Rest In Peace.

For now, I’ll leave you with one of my favourite images with him from 2009. 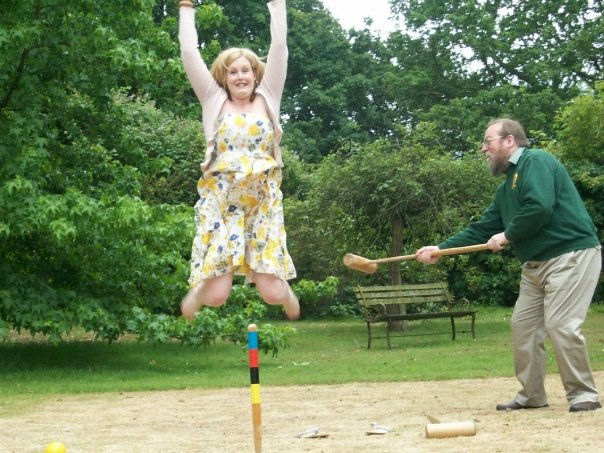 I spent my teenage years growing up in Malmesbury, Wiltshire. Dad and I used to look at an old airfield on the map that was a few miles away and talk about it and discuss it, and earlier this year, Bath Motor Club announced they were running an event there. It seemed like too good an opportunity to miss, so in our entries went and it was back to my parents’ for the weekend.

The venue was an old airfield between Malmesbury and Tetbury, at Long Newnton. It was a grass field, and having only done one Autocross before on a flint field, we hoped it would be a little smoother on the car.

The format for Saturday was Practice followed by three timed runs. Practice and my first timed run both had very “green” grass, but by runs two and three it was down to dirt and more grip. I haven’t driven Muriel too much on loose, and my times were a couple of seconds a lap off Matt.

I was building up pace and timed run 3 on Saturday felt really good, but that was it for the day. The forecast was showing rain for Sunday with different times it was forecast. My first run was dry, but I made a couple of small mistakes and the seconds add up! After that, the heavens opened and by the time I went out for my second practice run, it was a mud bath, as was run three. Times were definitely not going to improve and we really seemed to be struggling for grip. Everyone was, but even with knobblies on we were going nowhere fast and others seemed to have more grip. I found it a little boring although some of the sideways was fun, but I was really struggling to do anything with the car (as you can tell from the video!).

It was a shame it didn’t stay dry, as I would like to have kept improving my times, but it was still a good weekend with a well organised event, great hospitality from Mum, more seat time and good to explore a new venue. 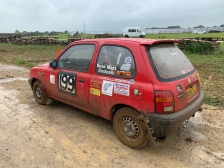