As predicted, nearly a week away with work and very long (17/18 hour) days meant training went completely out of the window. I had Tuesday off after an eight day stint and I thought “oh yes, I’ll train.” Well no… I was exhausted, I didn’t realise quite how tired I was, and with the weather being horrid I thought I’d go to the gym instead. However, my mind body seemed to have other ideas and before I knew it the day was flying by and it was time for a sports massage I’d booked, and that was that.

That meant that today, Saturday, became LSR (long, slow run) day instead. I’d hoped to do 9 miles on Tuesday and up it today but alas, it wasn’t meant to be. I’ve been to the gym to swim during the week, but no outdoor running.

I took the Waddesdon Greenway which I tried a few weeks ago, but I’d underestimated just how intense the wind was going to be. I wasn’t going into it, I didn’t have it behind me, but it was sideways. I was leaning into it just to stay upright and it was ferocious and unrelenting! After 6km and reaching the Waddesdon estate, I turned round and decided my last 6km could be around Aylesbury with hopefully the buildings providing some shelter.

As I came back into Aylesbury, I decided to take the Thames path instead and followed that along the river, until coming back along the various roads and estates that make up that area. I was two minutes from home but about 1km short so then came the fun and games of adding distance around where I live to hit 18km!

I would like to have made 20km today, but with the London Landmarks Half Marathon next weekend, 18km is good and next week will push me. I’m exactly on plan according to the Dementia Revolution Walk/Run plan, so whilst I might have had a few moments of doubt today, I need to remember I’m where I should be! It’s really hard not to compare yourself to others, but it isn’t the best idea as we are all different and have our own plans.

Earlier this week, I went in to see my local council as they are working to make Aylesbury a dementia friendly town and they’ve done some promotion of my efforts on social media which is great. I also trialled my new trainers today which were comfortable. Matt (my husband) kindly offered to buy them for me and I’m very grateful; they’re Asics and not cheap, but exactly the same as I already have (albeit a different colour) and these will be the shoes to see me through the all important next few weeks! 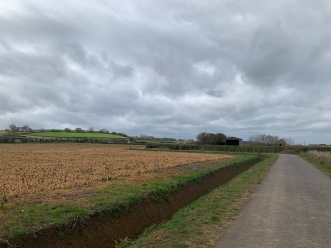